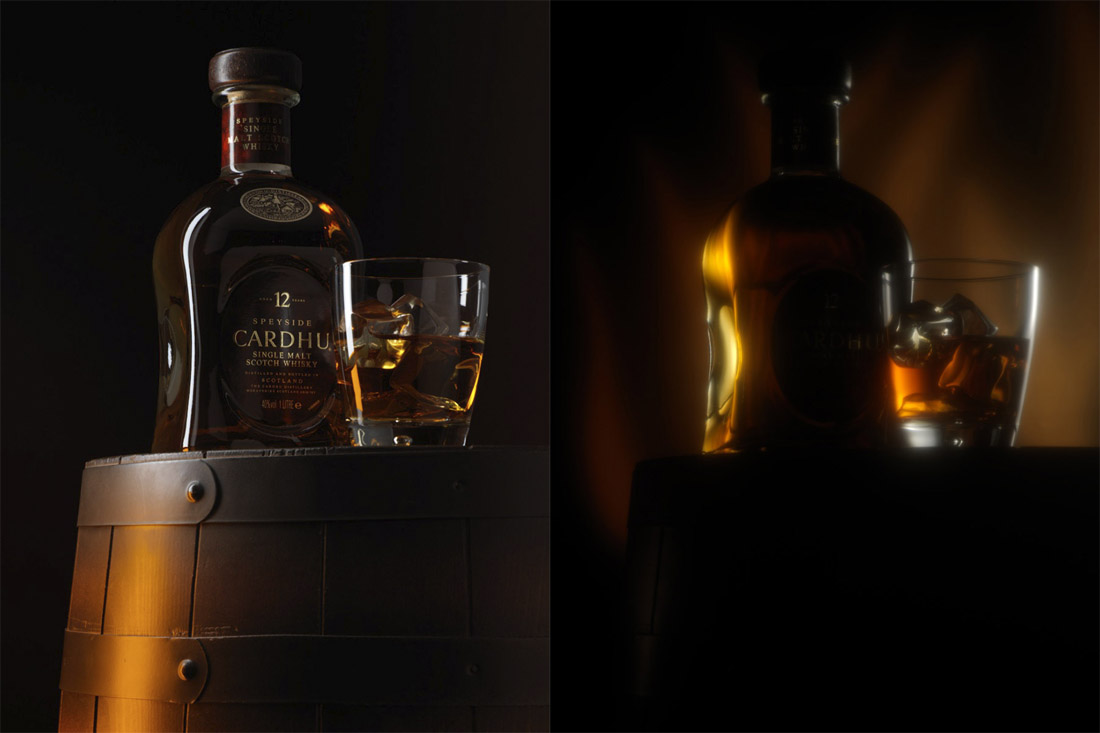 In this article of “How to” series I am going to tell about shooting a still life using multiple exposure.

As a technical trick, multiple exposure is not that new technique; from time to time it has been more or less popular among photographers. What is the meaning of this special effect? Everything is that easy: in the age of analog photography, one and the same frame of film was exposed two or more times. Joining of several subjects into one final image gave sometimes interesting results.

In the modern digital studio workflow this trick can be achieved by multiple light bursts at long exposures. Why long exposure? As we a shooting on a digital camera and, as a rule, do not have a direct possibility to make several exposures on one “frame”, we just do some light impulses while the shutter is open. All we need is complete darkness in the studio, and remotely controlled studio lighting. 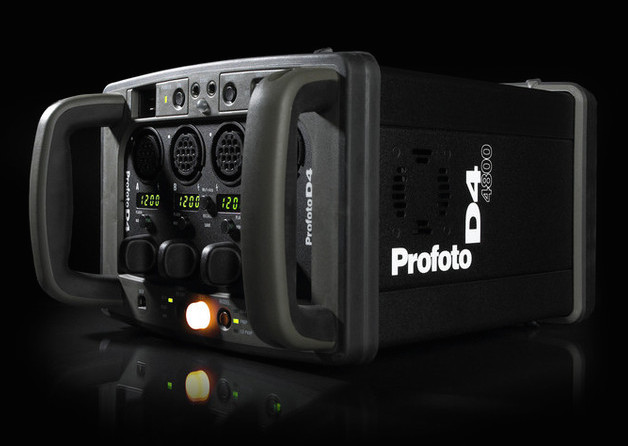 At 4800 Watts/s Generator D4 is the best universal generator in the Profoto lineup. It allows using four independent asymmetric jacks, and thanks to its power, one D4 can lighten up almost any setup.

What else is important for me in this generator is the ability to control it through a PC. This is very convenient, especially if a photographer tends to shoot directly on a hard drive instead of a flash card. In this case you see not only the image but the full picture of light as well. It looks approximately like that: 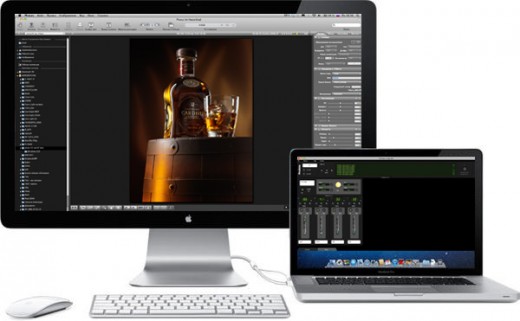 For extra convenience, I use usually two monitors, Macbook shows data from the generator, and the big one does that from the camera. However, it is possible to keep the both windows opened on one monitor at a time or open them one by one, in turn.

I briefly explain the diagram of light, which was accepted as the most successful for this particular still life after many tests and tries. 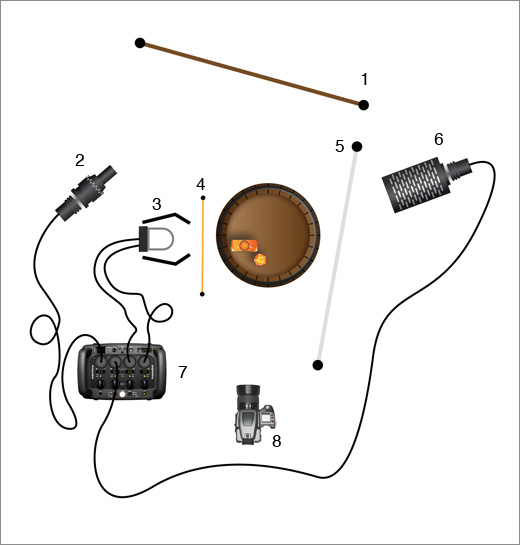 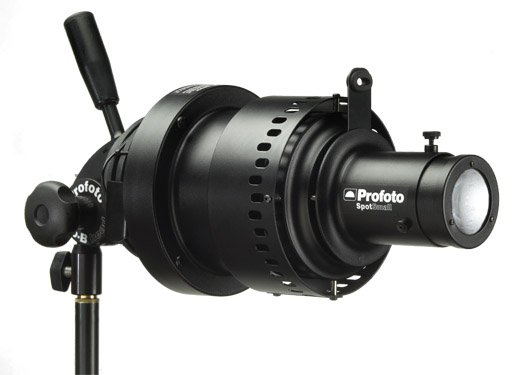 This attachment is primarily intended for projection with standard M-size (66mm) Gobo’s. For our still life we made a mask manually, having cut it from dense foil with a knife. In addition to that, we cut a yellow gel filter by the size of the mask, so that the object had a warmer tint against the brown background.

3. A Striplight M was used as the key (painting) light source. This attachment gives a very narrow and evenly distributed, yet at the same time soft flare on the bottle, and lightens up the barrel. 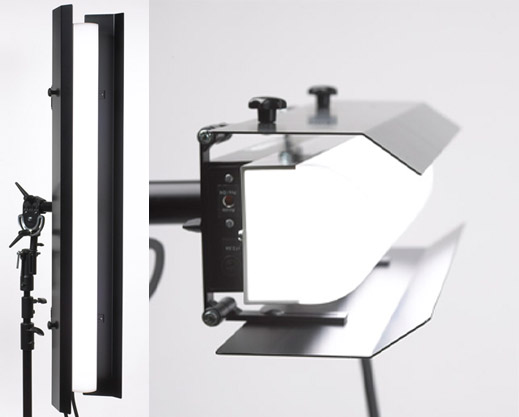 I like StripLight, because it allows including in the image a very bright flare thanks to its even distribution of light. A common soft Strip does not have such uniformity, as a rule, therefore to save whites in the center of the frame from burning out, it should be made less bright.

4. This is a yellow gel filter covering a part of the strip that lightens up the barrel. It helps us to get sharp white light on the bottle and soft warm light on the barrel from a single source.
5. A large (1 x 2m) transparent screen. As such, it softens the image from the right side, that is, fills it in with light.
6. Besides, a light head with a Fresnel attachment acts as a backlight, lighting through this screen as well. 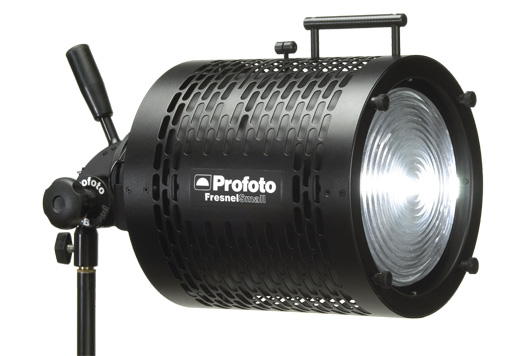 In my opinion, a Fresnel lens is perfect for backlighting, as the built-in aperture allows for getting a light spot of any size. This attachment is very convenient in use with powerful generators, as even at smaller size apertures you can get adequately powerful light.

7. A Profoto D4 Air generator, PC-controlled via Profoto Studio Air software.
8. A Hasselblad camera with a tilt-shift attachment. The camera is placed at a considerably lower position against the bottle, and the tilt-shift attachment allows us to get sharpness exactly in the plane we need without closing aperture and extending the DOF, that is, without making the frame totally (and needlessly so) sharp.

Let’s start with the very beginning. The idea comes always first, so I was able to imagine the image, at least approximately. From the technical side, I had only to put a barrel in proper place of my studio, and a whisky bottle with a glass on it.

Advice: To simplify post-production, all manipulations with the bottle and glass should be carried out in soft fabric gloves, so that to avoid fingerprints.

Now it’s the turn of light. The pattern is explained above, so now I am going into the sequence of actions.

We put some ice into the glass and carefully, avoiding any marks on the glass, pour in the liquor. You can use true product, but coloured water (or, better, vodka) is also possible. Beauty of the light pattern in the glass depends rather on position of the ice within, but not on its liquid content. Here, it is absolutely necessary to get rid of laziness and move the ice in the glass, maybe, even refill the glass with ice. If you find the best position of the ice cubes, you’ll be surprised with how dramatically the image changes.

After all these manipulations we do the final correction of light and, having done some test shots to check the optimal light distribution and composition, we get the ground for our still-life, which we are going to get using the technique of multiple exposure. 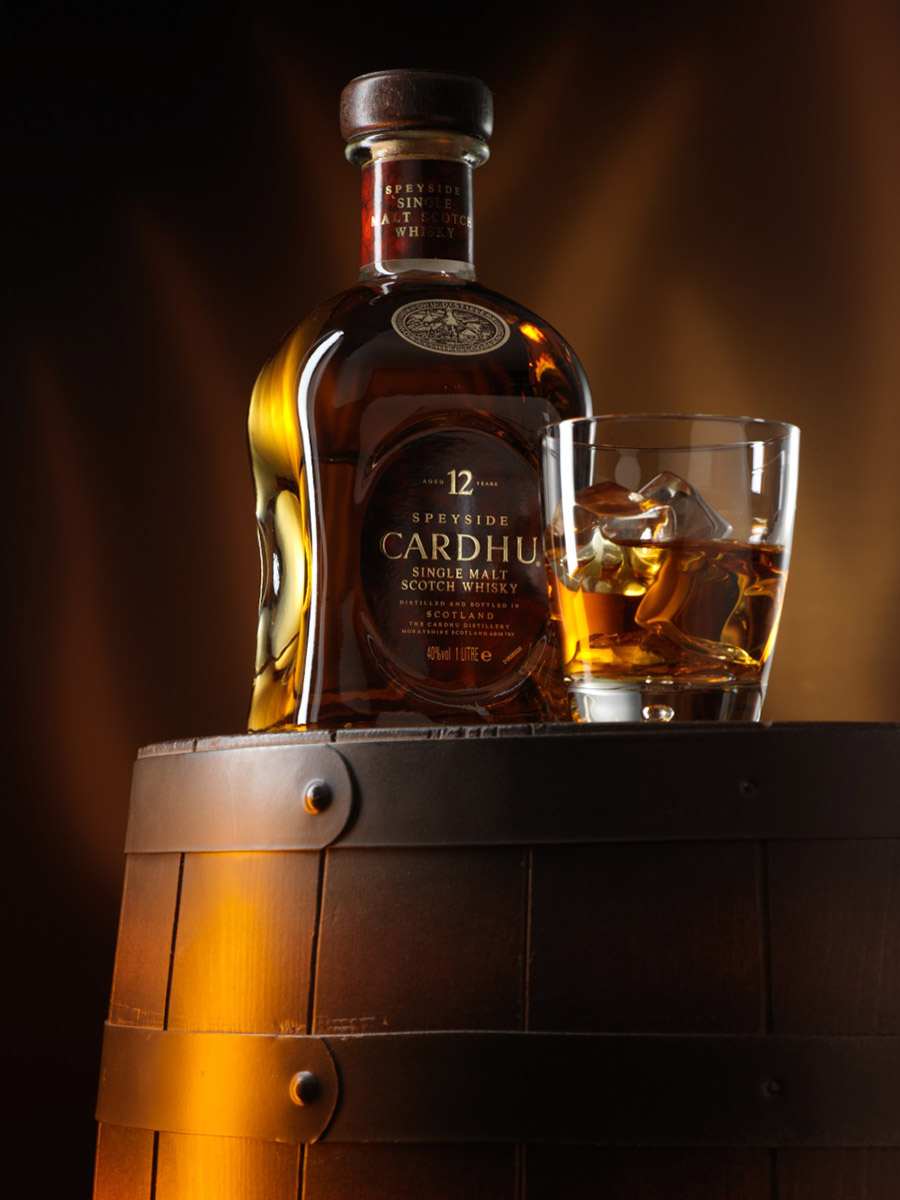 Initially, I supposed we would get something more or less like that. The image is brilliant and seems not that bad at all, but it lacks some soul, if I may, it is too refined. It needs some softness and air, while keeping the top sharpness and straight perception. That means, we need some magic light.

I keep this technique always on my mind, while shooting still lives of the kind. What’s the point of that? Briefly, we divide the light sources into two groups, exposing them in turn at a long exposure. The trick is that one group is used as is, but for the other one I put a soft filter on my lens. As a result, we get an image, which is sharp and soft simultaneously, in one frame. Moreover, as a rule, the both images combine into one very nicely.

I divided the light in two groups in the following way:

— The painting light was exposed sharply, so that to draw the texture of light, barrel and, surely, the bottle. 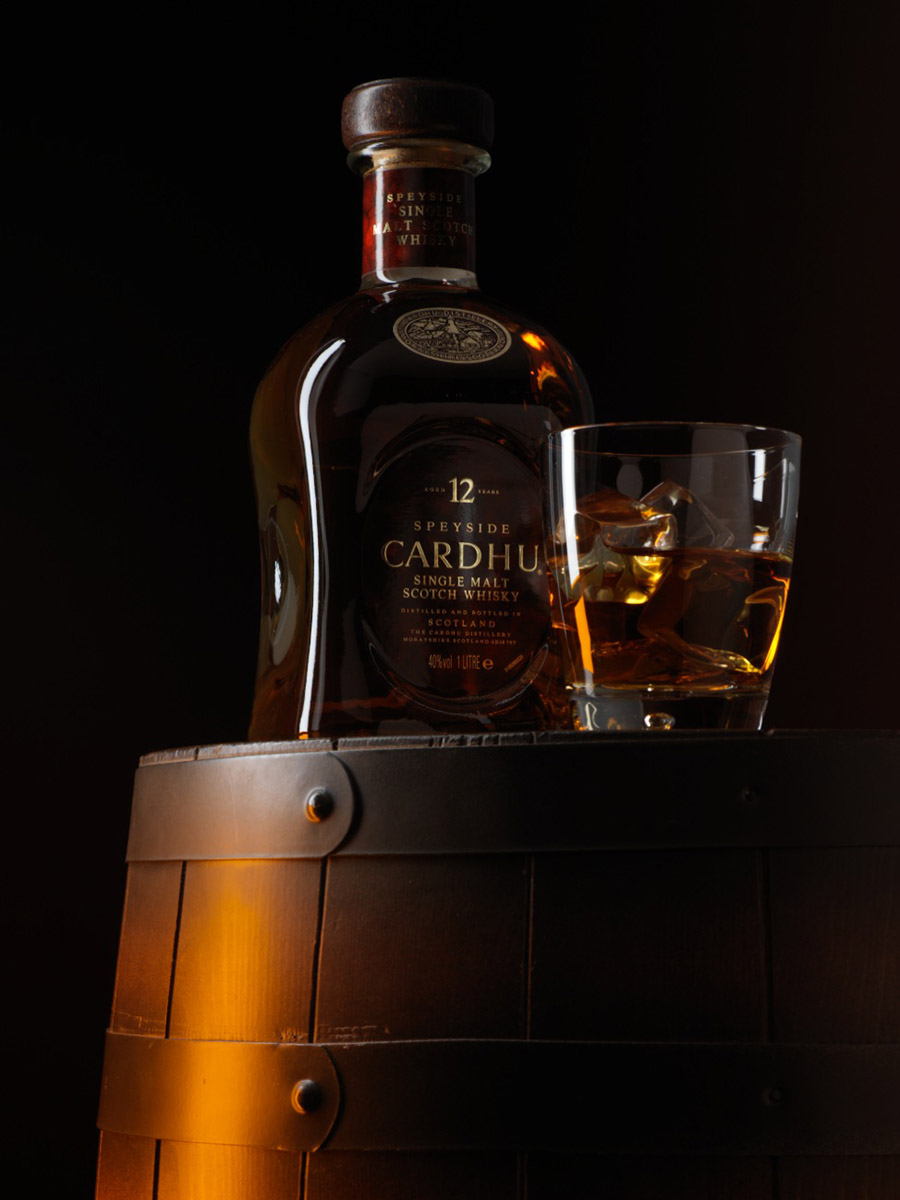 — The backlight and background light were exposed using soft filter, giving pleasant softness of the background and flares on the bottle and glass. 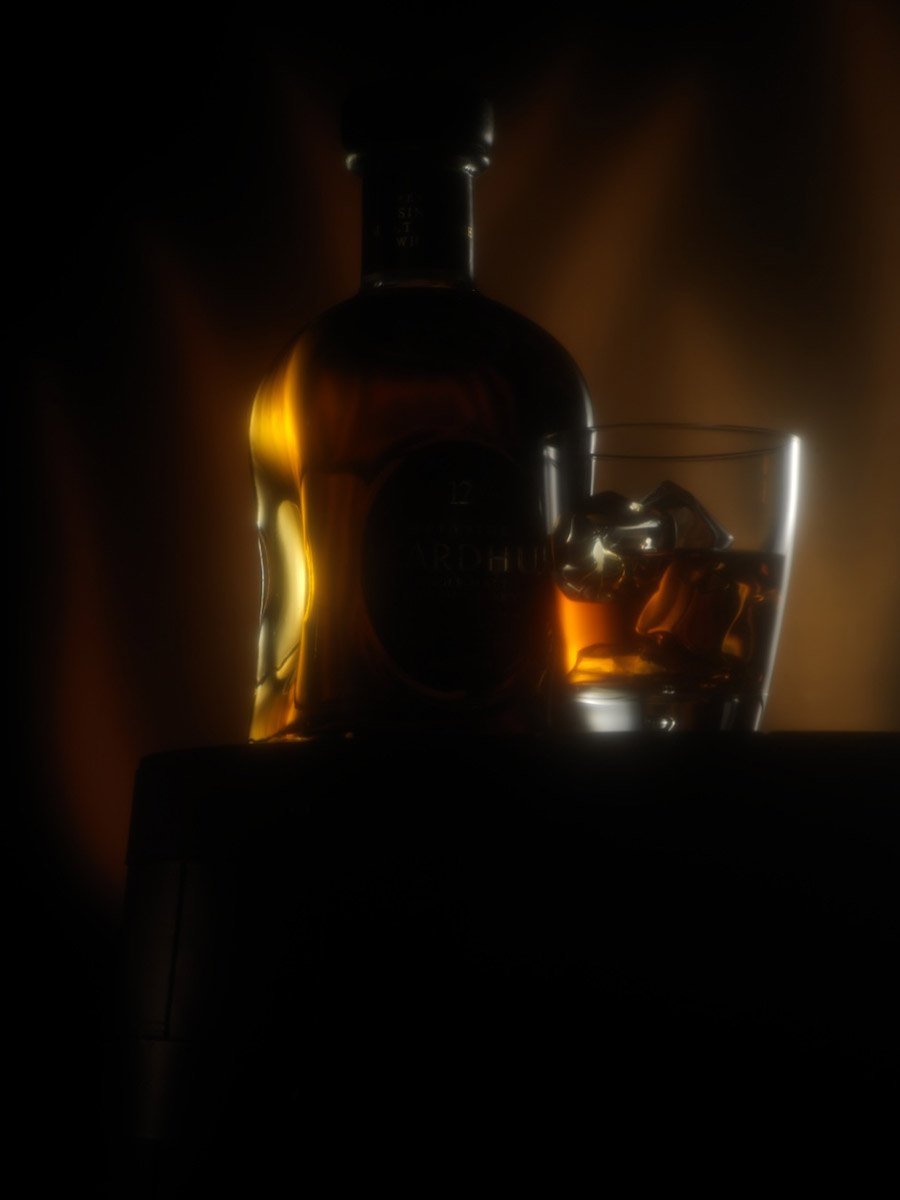 Then, all we had to do was to combine both exposures within one long exposure time.

Advice: Shooting such scenes, it is of the utmost importance to use a sturdy tripod standing on the firm ground, so that the overlaid exposures were not displaced against each other.

And now we, having switched off all the lights in the studio and controlling our light heads from a PC, do two light exposures, while the camera shutter is open. Eight seconds were absolutely enough for us; within this time slot we did two light pulses with various sources, having covered the lens with a soft filter in one case.

Everything went on as planned, and we got the following nice picture. 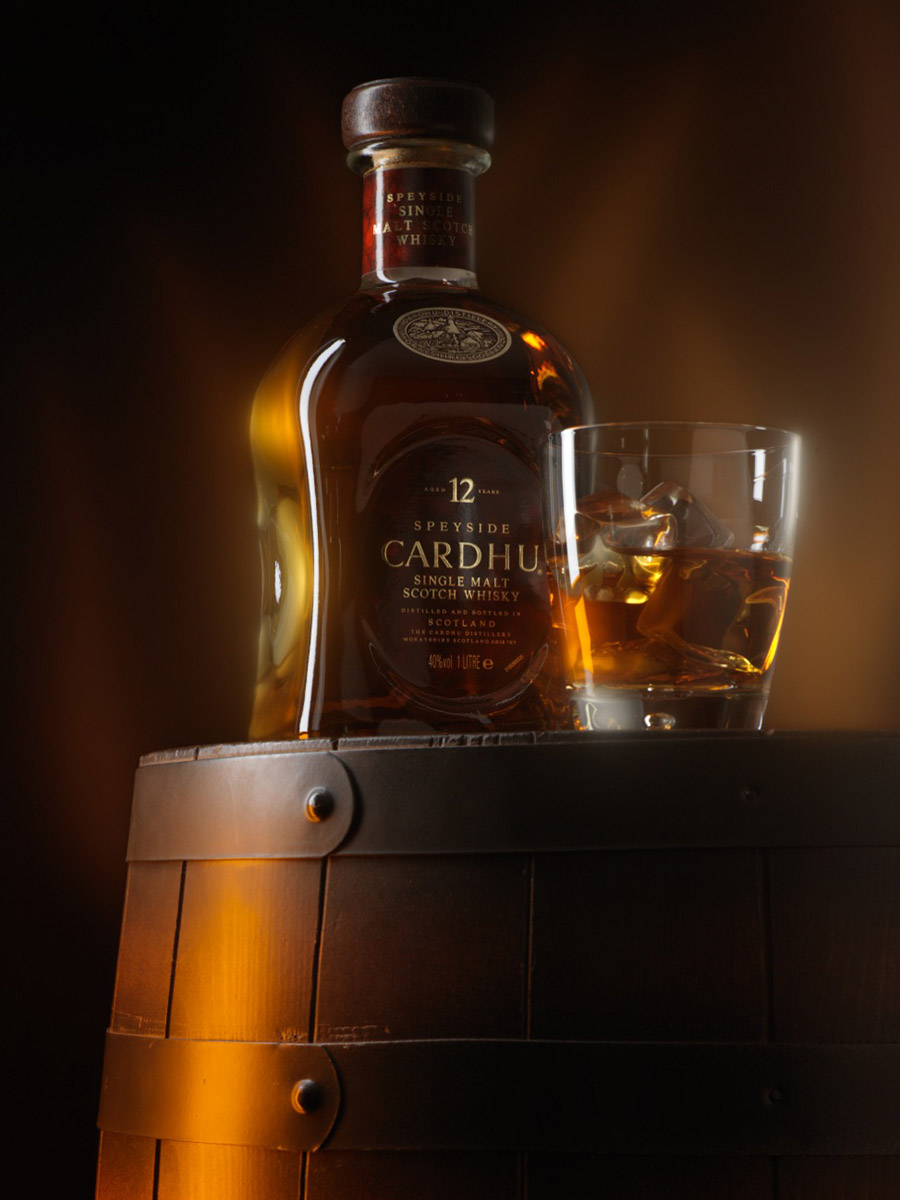 As a variant, to fill our still-life with a distillery mood, we decided to make some more shots with some smoke. 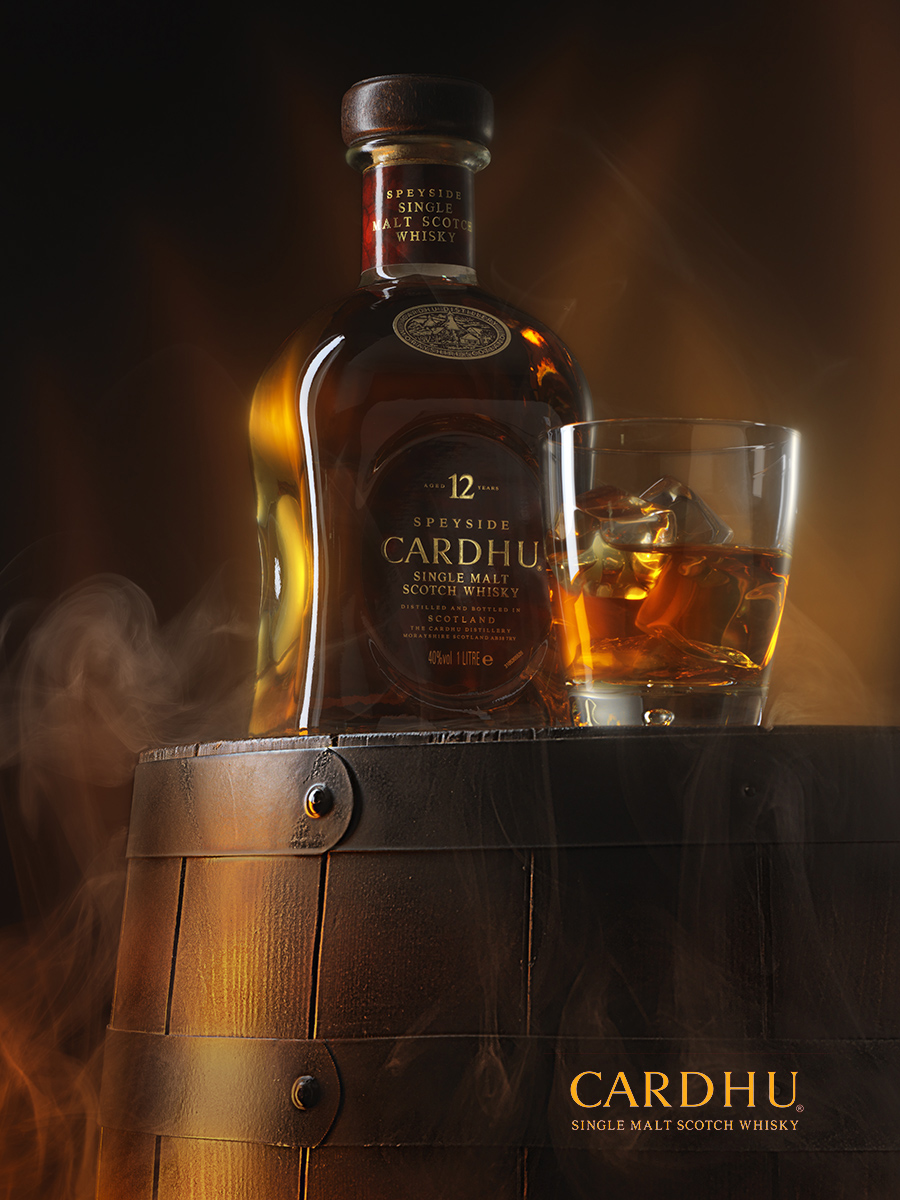 Advice: Such shooting sessions can be carried out without such powerful remotely controlled generators. Sequence of flashes can be arranged manually, using the simplest impulse lights, and the lack of power can be cured with multiple flashes or a higher ISO setting.

I wish you good luck with your creative experiments!