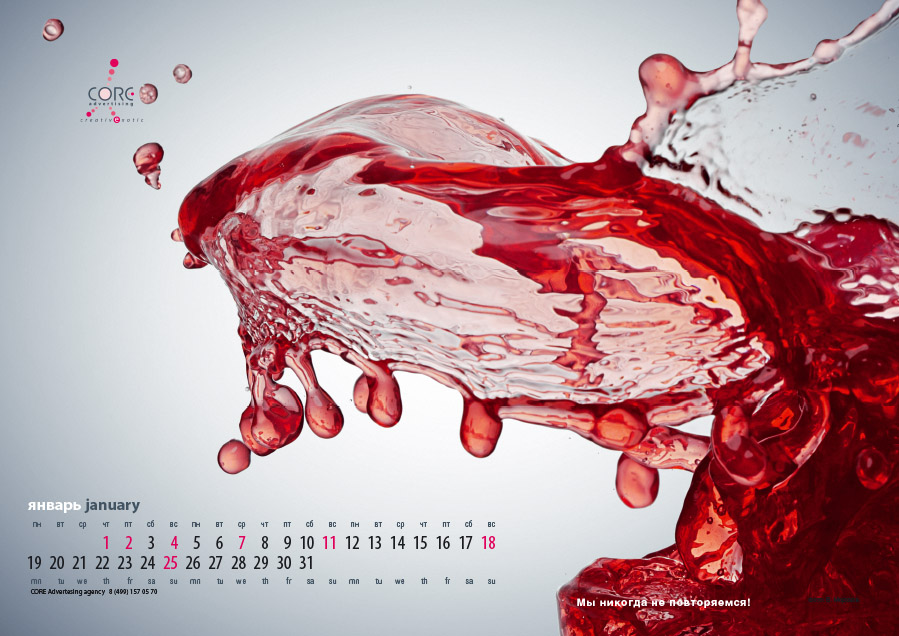 In this article I explain a way of shooting moving liquids, known as “Splash”.

Shooting liquids is a very interesting and at the same time hardly predictable process. As a rule, the sessions tend to take a lot of time, because a photographer has to make many shots with pretty lengthy technical breaks in between. However, the result can be beyond any expectations of the photographer and his or her customer. So, the game is well worth playing.

Let us consider the physics behind the process. Observing a splash, we can divide its behavior into three phases.

• Phase one — high speed, yet the image is not very expressive; unsuitable for shooting.
• Phase two — the speed of liquid slows down and can be easily frozen. The most advantageous picture, as the splash reveals its full beauty.
• Phase three — The splash passes its climax, the speed slows down almost to zero, the picture is acceptable for shooting and the difference is made by drops flying down. 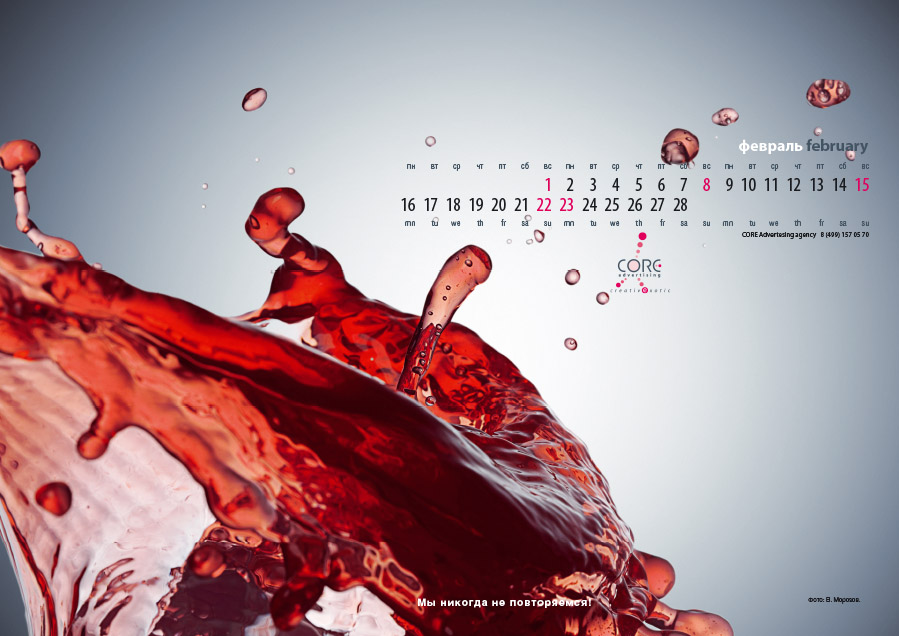 That means, the phase two begins an instant before the liquid rises to the highest point of its movement. Thus, the photographer has to catch the image since this point and till the third phase evolves. 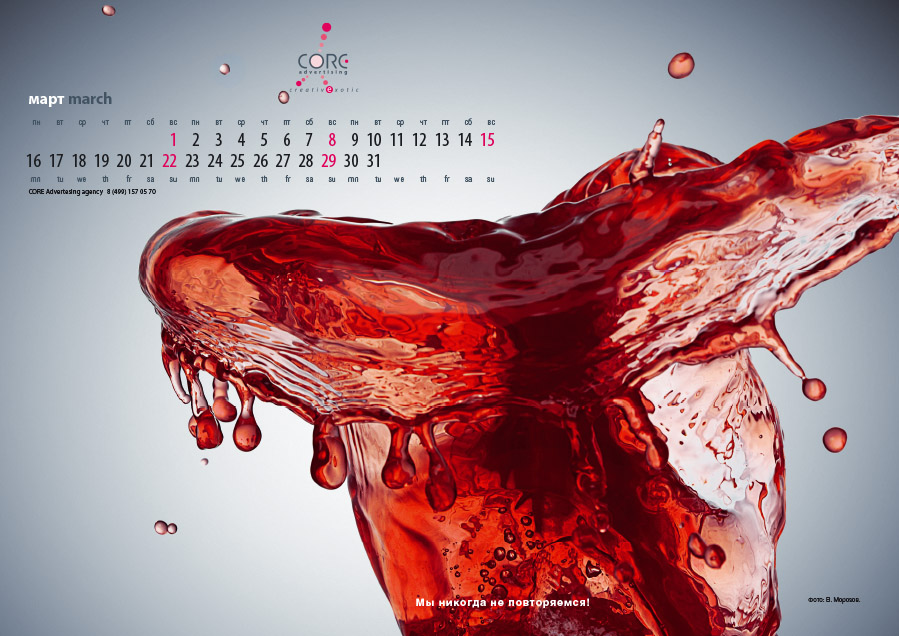 Professional photographers use various approaches for such subjects. To get better results, the workflow should be arranged so that every taken shot gave not an occasional, but foreseeable result.

I am going to describe these approaches using as an example a series my studio did for a calendar of CORE Advertising Agency.

We put a smaller volume reservoir (1), from which the liquid is supposed to be thrown out, into a larger one (2), to collect the drained liquid. As a background, we used a semi-transparent material (3), a kind of tracing paper.

Two studio lights (4, 6) with diffusing attachments were placed as shown on the diagram, so that to get perfectly lit splashes in all their various shapes. The light source (5) with a portrait dish and a honeycomb attachment created soft gradient on our background. 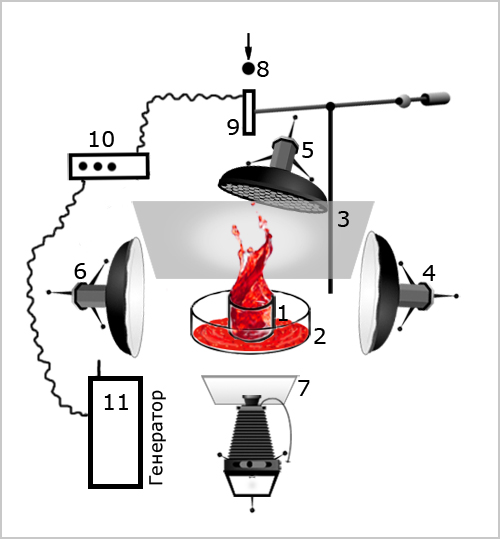 Shooting with continuous light, one has to use short shutter times for shooting such dynamic actions. But in case you work with powerful studio pulse lights, the shutter speed in fact is the pulse length. To freeze the process, it’s better to use lights with the shortest possible pulse time. As a rule, some generator-based systems possess quite acceptable specifications; as a variant, you can also use compact flashes of major brands.

For safety reasons the shooting ground should be covered with polyethylene film (packaging film will do OK), which is not depicted in my diagram. In this film, usually cubic in shape, you cut a window for the camera lens, which should be covered with a thin optical glass (7) to protect the lens from splashes. This glass should be wiped clean and dry from time to time. Surely, the studio floor is also to be covered with film. Doing so, you’ll keep your gear safe from unwanted liquid drops. 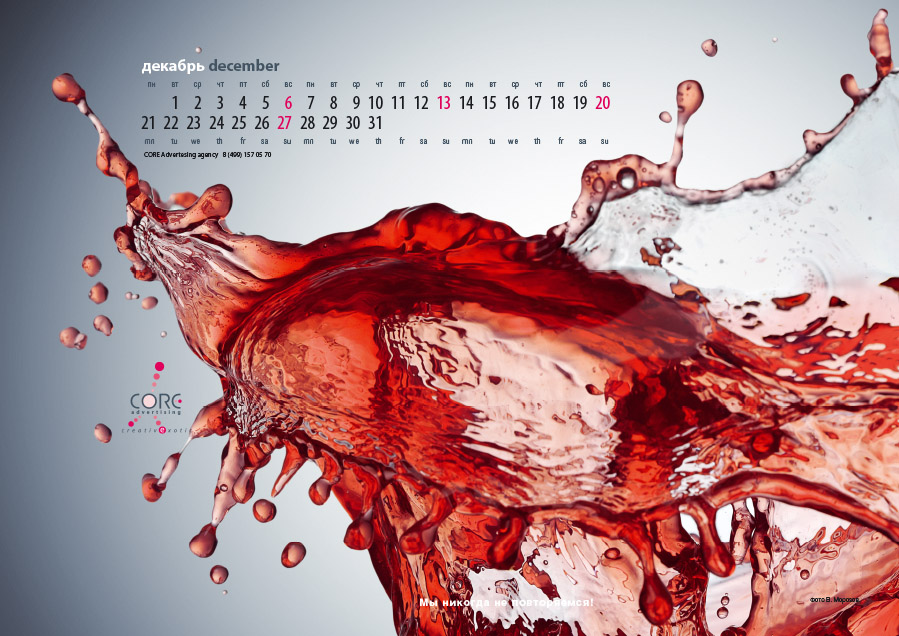 How do you catch the moment? I know and practiced two possible ways. The first one is to catch the moment manually, and that’s quite possible after some training. The second one is realized using a movement sensor, which triggers the light at the necessary instant.

Here we used the second way, with a movement sensor. How does it work? The algorithm of its work is very simple: detecting the flight of a subject in one point it bursts the flashes with a certain delay you have preinstalled. Thus, changing the delay time, you select the splash phase you need for shooting. And you get it — always.

The best way to do such a shooting is to use an assistant. The photographer operates the camera and other equipment, the assistant creates splashes.

• Switch off all the lights in studio.
• Open the shutter.
• Drop a weight (8) into the reservoir (1) from a certain height.
• The movement sensor detects the weight as it flies by, and using a delay timer (10) bursts the lights powered by the generator (11).
• Close the shutter.
• Switch on the studio lighting/

Thus, it is possible to take a consequence of shots of one and the same phase of splashes. Not all the splashes will be beautiful, but you’ll be able to choose the best try.

Further, having changed the delay, you’ll be able to capture any other phase of splashes. The main advantage of this approach is lower quantity of failed shots in every series. 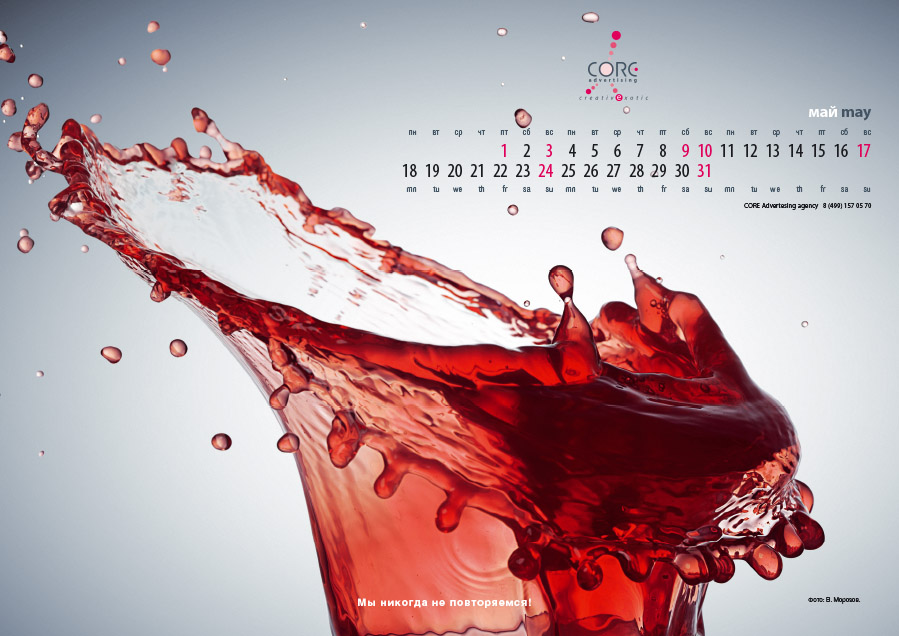 Try to use various things as weights for throwing into the reservoir; you’ll be able to create splashes and sprays with various special and unique shapes.

The best images created during this shooing session were included in the agency’s calendar as the perfect illustration to its slogan: “We Never Repeat Ourselves”.

If you’d like me to throw more light upon the project, please feel free to ask your questions.

And—good luck to you with your new projects! 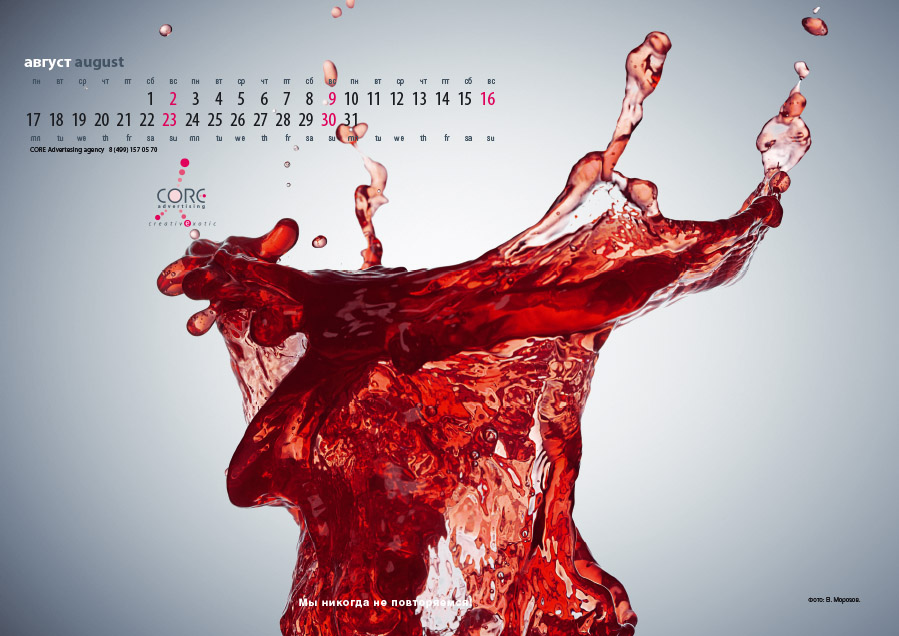 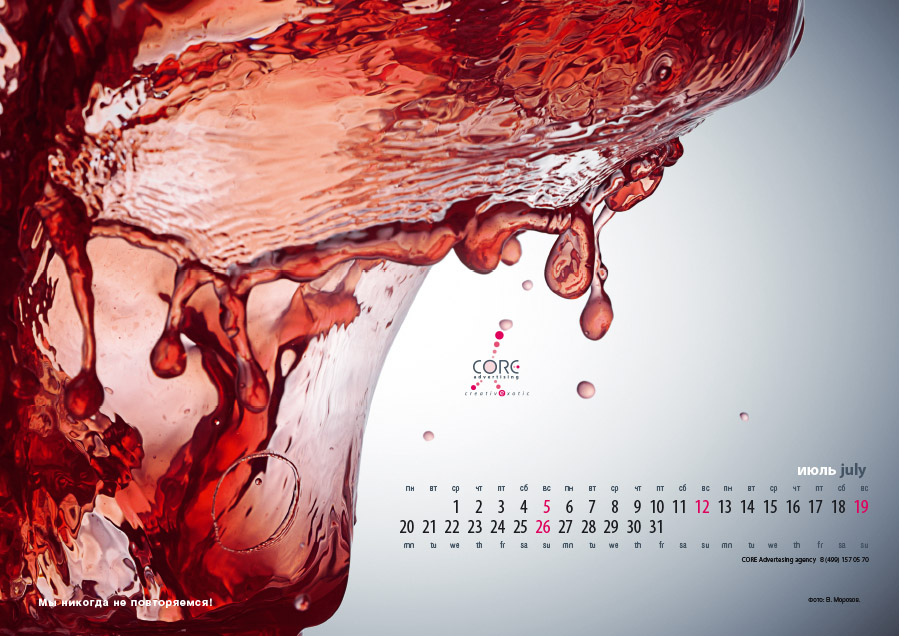 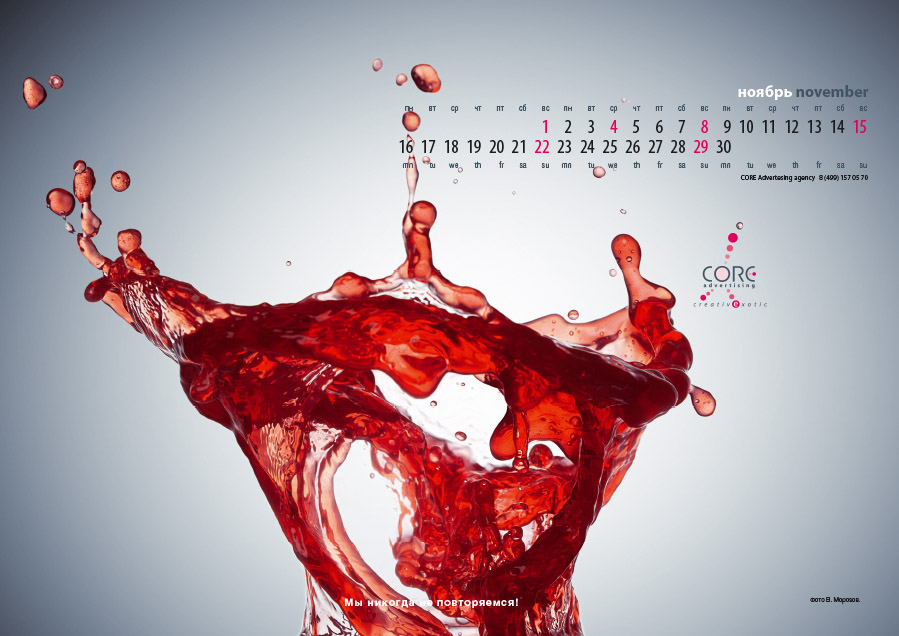 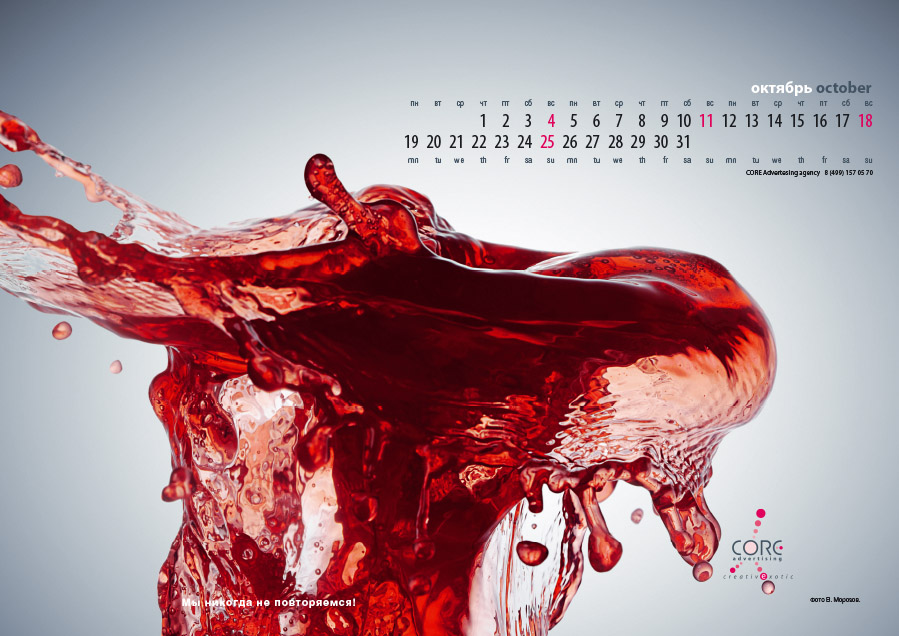