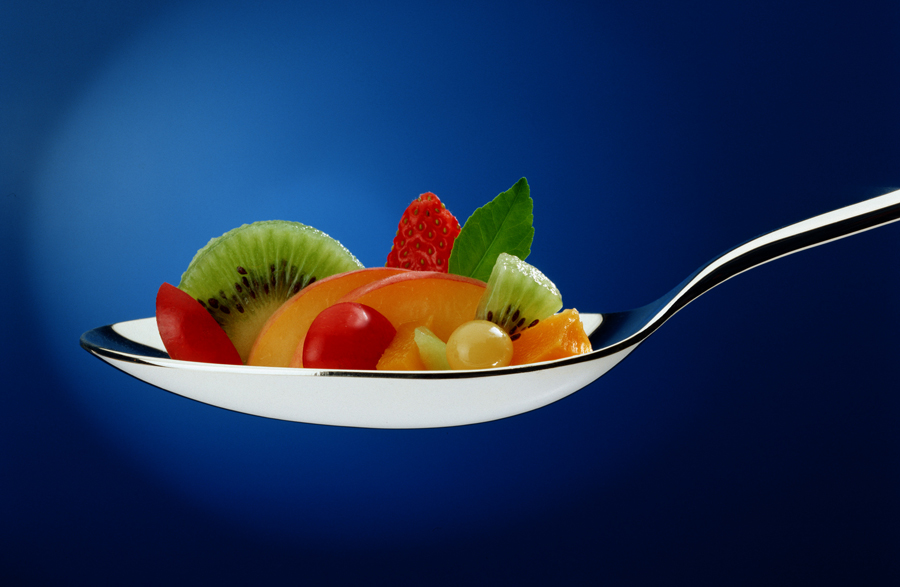 It was summer, with plenty of fruits and berries around. I’d like to take a still life, but with something really particular in it: something unusual, big, laconic, and bright. Once in a shop I saw a big spoon. By the way, when I go shopping I look at all goods only from the point of view of using them as props for shooting.

Well, the spoon was a good thing: nicely shaped, carefully manufactured, with a voluminous handle. These advantages can always effectively play visually, and I shot lots of spoons before, so I am kind of an expert in them. As usual, the decision came unexpectedly: my concept was to combine the scarcely detailed graphic spoon with a bright and colorful still life in one composition.

What for all these difficulties, and why in one shot? Just because it took place not only just before the digital age, but before the very age of Photoshop. Everybody shot on film, reaching considerable successes in the process. Besides, it’s not that interesting, to shoot simple things.

As subjects for my still life I decided to take slices of berries and fruits (strawberry, mango, cherry, grapes, a kiwi, a peach and a small cherry leaf).

The concept of light came quick. I decided to use four pulse lights:
The first one, with a soft-box, from above;
The second one, with a small soft-box, below;
The third light with a conical attachment (snoot) for drawing a spot on the background;
The fourth light with a honeycomb grid attachment for backlighting of the spoon content.

I used a dark blue resin background by FOBA to create deep color contrast with the main image.

The spoon should be safely fixed. For the purpose I fastened it with scotch tape to an aluminium pipe. Such pipes, 8 to 10 mm in diameter, are very convenient for fastening various objects. The pipe was clutched in a special device (1), that allowed to move, rotate and tilt it at various angles. The general rule of thumb for still life photography is that all objects should be safely placed or fastened. Naturally, all the devices are supposed to remain off the frame; your shot is to be ‘clear’. This is the basic principle of a still life photographer.

First of all, the spoon had to be carefully washed and wiped dry without any traces on metal. Working with metal, always wear fabric gloves to avoid multiple disgusting and disappointing fingerprints on metal (and glass as well, for the matter) that become clearly visible in enlarged image.

The next step was to place the spoon in the proper position, to find a proper camera angle, and to create a decent lighting so that the spoon looked graphic. The light with a soft-box (2) created an even and soft lighting for all composition with nice flares on the spoon and its handle.

Besides, to create more accurate graphic on the spoon, I used a small piece of a black cardboard (3) which even more emphasized the spoon’s shape was necessary. (White, gray and black sheets of paper or cardboard should be always at hand of a still life photographer.)

To simplify my work and to avoid installation of an additional light source, I tried to illuminate the spoon bottom with the light reflected from the top soft-box. For this purpose, instead of use of an expensive white flag of quite a big size, I did some experiments with a sheet of white whatman paper (5), using which I highlighted the spoon from below. I found the optimum distance between the sheet and the spoon. As a result, the simple sheet of whatman allowed me to replace an expensive white flag. In this case, the need for the second soft-boxed light source (which was supposed to be placed below) disappeared, I managed to replace it with a simple sheet of whatman, and it simplified the entire diagram, as I managed the job using only three light sources. The sheet of whatman created on the spoon a very light gray gradient, which painted perfectly the bottom edge of the spoon and the thin line of its handle, without loss of information in highlights on metal, making the spoon to look even more graphic.

The spot of light on the background should add some air to the image and make the entire composition more dynamic. To reach this purpose, I attached a snoot to the background light and directed it at a small angle to the background. To escape any ‘bleaching’ of the spot, I had to put a blue filter (8) on the light with snoot. I controlled the brightness of the spot using a flashmeter. Besides, I fastened a black flag (4) to the soft-box above to prevent its light from falling on the background (9).

Then, I did some shots of berries and fruits in the spoon on film as preliminary tests, using aperture f/22 at 1/125 sec.

The next step was test shooting with a field camera of 6×9 transparency, with exposure bracketing. To ensure the whole spoon is in the DOF, f/22 was enough. The shutter speed, while shooting with pulse lights, equals in fact to the pulse duration, which is approximately 1/400 to 1/1500 sec. In such cases I use the shutter speed of 1/125 sec., for the influence of a stray light on exposition in studio is practically negligible in comparison with the power of pulse lights. Having developed the film, we could easily find the best exposure for the key and background lights.

In digital photography the exposure management became considerably simpler and quicker. You can measure image density in important areas and get objective data to keep details in highlights without losing time and waiting to have the film developed.

As usual, we shot together with Vladimir Morozov, Sr. Fruits and berries were carefully selected. Everything was prepared, so we could start our shooting session. However, the most difficult part of the job was that the slices of a ripe peach can live only for 2 to 3 minutes without getting air dried. Within this time we had to set up the entire composition in the spoon at once without moving the objects, which could leave traces on the polished metal of the spoon. If we failed to set up the composition successfully, we’d have to dismantle the fastened construction, wash the spoon and set everything up again, from the very beginning. Although we had no predesigned setup for objects, our hands did the job habitually.

Believe it or not, it was an immediate success. We had just to manipulate a bit the direction of background light spot falling onto fruits and berries. It took us not more than 20 seconds to do it. And finally it was possible to press the button on our cable release.

This shot was made as a creative work. After a while a customer decided to purchase the image, and now it is the trademark of Rus na Pervomayskoy, Ltd., which owns all the rights.